Have you ever had the problem of having too many options or endless opportunities?

What about having the ability to go in any direction and accomplish any goal?

I am talking about both big and small goals. It’s a real problem for me. I know that sounds like I am whining, but it’s really a big deal. And yes, I realize this is a total first world problem, but hear me out because you might see yourself in me.

When I was a kid, I knew exactly what I wanted to be when I grew up.

I had two, very specific dreams.

The first one was realized when at six year old I watched the wreckage of the Challenger Space Shuttle falling- in that moment I knew I wanted to be an astronaut. I carried that dream with me through all I did and believed in myself until the sixth grade. I even had the awe-inspiring opportunity to attend Space Camp in Alabama in the spring of sixth grade.

That trip confirmed my desire to go into space, specifically to be the first woman to land on Mars.

However, that dream was shattered upon my arrival back home after an unfortunate encounter with a favorite teacher.

You see, since I had missed a few days of school, my sixth grade math class finished up a unit. I wasn’t there for the last two lessons. My first day back, I had to take the unit test with the rest of my class. It didn’t go so well. The day the tests got handed back, my teacher asked to speak to me in the hall. I followed her into the hall expecting a considerate “let’s try this test again” kind of talk.

No, no, no. Nope. That was not the talking to I received.

Instead, she got right in my face, shaking the test in front of me and told me how

“disappointed she was in me and that I would never, ever be smart enough to be an astronaut.”

I was stunned. I was a twelve year old kid and I really liked her. She was tough on us, but I loved that about her. Not that day, that day respect turned to disrespect and my dream of becoming the first woman to land on Mars switched in an instant.

The Birth of a New Dream

At that precise moment, I knew that I wanted to be a teacher. More specifically, a teacher that provided fantastic instruction and (more importantly) a caring and encouraging learning environment that allowed every student to see their potential, regardless of the limitations their own mind set.

Looking back, that was a very clear moment in my life. I set very specific goals that day. I would become a teacher, come back and teach in the district I grew up in, and my future children would then attend a school in the same district. Clarity at twelve years old.

So, I went off and did just that. Everything I did in life circled back to those goals.

I was reaching those goals that I had set only eleven years prior.

I proceeded to teach at my beloved school until I had to face big decisions regarding my health pertaining to BRCA choices and the impact on my family.

Sending in my leave of absence letter to the School Board was one of the hardest days of my life. I felt like that sixth grader again, who just got her dreams ripped out from under her. I could barely catch my breath and cried for days.

That was the day when a little bit of me died.

Looking back, I have struggled with my self-identity for the past eight years that I have been out of the classroom. Having a dream for so long, living in it, and then all of a sudden not, is a hard concept to grasp. So, I have been floundering.

I have tried on a few different volunteer roles and jobs to fill the gap during my identity crisis. All of them have been with the right intentions and for the best reasons, but not all of them have fixed me. Plus there was always one underlying issue and one that was at the root of a lot of my guilt for this identity crisis…my BRCA surgeries.

So in 2016, I decided to take care of the elephant in the room and have the necessary, preventative surgeries  for my BRCA+ status. After all, it was consuming my daily thoughts and going through the motions of life without dealing with the decisions I needed to make regarding my reason for leaving my dream job, needed to be addressed. So, I did it. I moved forward with the surgeries and had some setbacks (ok, a few setbacks) but pressed on.

With only one surgery left at the end of the month, I am sort of feeling like I can move on from the weight of being a BRCA gene mutation carrier. Yet, that comes with it’s own set of unique troubles because I have been living with that identity, too. And now it’s different.

So today, I am feeling a little lost. I struggle with how to spend my days in a meaningful way that is both purposeful and goal oriented, all while keeping up with the reality of life. I want to achieve big dreams! But one problem… I don’t even know what these new dreams even are or even could be! The possibilities are endless! 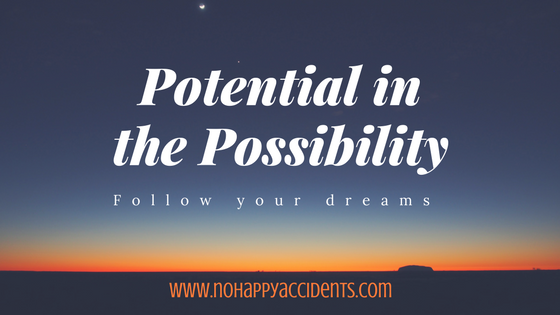 There are endless opportunities and possibilities out there in the world, and I want in.

I want to get out there and seek them out and discover what I am truly meant to be. I am my own student in my classroom of one, in a classroom meant to encourage and foster endless potential without limitation.

I must get rid of my limiting beliefs and rise up to greet the day and take on these big questions. I must also not feel guilty for feeling this way. As my friends Ruby and Allyson would say, “I am not my story.” It’s true. I am not my story, my story isn’t even written yet.

How to Cope With Your Own Identity Crisis

If you are struggling with an identity crisis after a career or family change, hang in there. It gets better. I won’t promise that it gets easier right away, but it gets better over time.

Be a POTENTIAL SEEKER for yourself and those around you. We all could use some ENCOURAGEMENT and GRACE as we falter and try to write our new stories.

There are no happy accidents.

You can check out my other writings on Full Time Mom, 30Seconds, and SheSavvy.You can also follow me on Twitter at @barefoot79 or @nohappyaccident and Instagram at @nohappyaccidents_kim

If you liked this article, you may also like:

Six Decades on Earth~ Lessons from my Dad

Published by Kim @ no happy accidents

View all posts by Kim @ no happy accidents

One thought on “Warning: Self-Identity Crisis and How to Cope”

Check out my Tip Stream on #30Seconds